The Last Barbarians by Michel Peissel 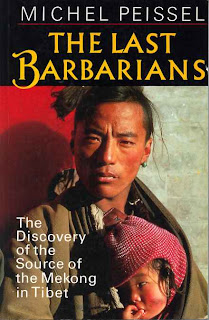 I first heard of Michel Peissel in the early 90s when I was starved for reading in Katmandu and found his book about Mustang in one of the shops in Thamel. It's an entertaining book and will be reviewed here someday, but I have not paid attention to the author since reading that account of his first forays into the Himalayas. By chance I stumbled upon this later literary production of his a while ago. The Last Barbarians, The Discovery of the Source of the Mekong in Tibet was published in 1998, more than 30 years after the Mustang book, and it was great to discover Mr Peissel hasn't lost his boyish, almost naive, straight forward style with age.

As the title suggest this is a book about exploration in Tibet. Peissel and his companions are looking for the source of the Mekong-river that, surprisingly enough, was not yet discovered in 1994, on the high plateau of Tibet.


Peissel's small expedition travels with ATVs and later on horseback in the outback of Qinghai following the upper Mekong towards its source. The author describes the deprivations a middle aged man faces on the inhospitable high plateau plagued with hailstorms, wolves and thin air, at times questioning the sanity of such an endeavour. Peissel is a real expert on the Himalayas, its geography and peoples, with decades of on-site experience and it's a joy reading his description of the natural wonders and encounters with locals. He is also somewhat of a champion for the cause of Tibetan people and his affection to the nation shines through the pages of the book.

On several different occasions in the book Peissel gets a bit philosophic and questions our current boring and passive consumer lifestyle by contrasting it with the freedom and exciting life of the Nomads. One can't help but wonder how much the world loses if these ways of life are lost forever.

Peissel admits he has never really grown up and reading his books one can believe this is not just an empty phrase. This boyishness has certainly been a factor in his colourful career. To me he is one credible adventurer and explorer who has done things most of us only dream of.

Oh, and the Barbarians in the title are not what you probably originally expected.
Posted by Markus Laine at Monday, August 01, 2011