This was a difficult one for me. I realized I had not read a book on China's general history since university (where it was compulsory and therefore not always interesting). I have a lot of history books in my shelf, but they all focus on a smaller part of the big picture. My choice for the list also covers just the 20th century, but covers it well. 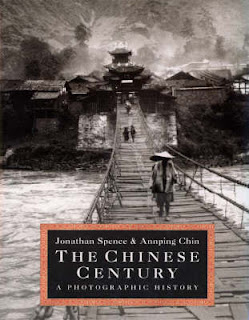 The Chinese Century, written by Ann-Ping Chin, a lecturer on Chinese history at Yale University and Jonathan Spence, one of the authorities on Chinese History, is a Photographic book fit for the coffee table. This doesn't mean that bibliophiles should snub it. The book is extremely well written and gives a concise account on China's history in the 20th century.

The emphasis, however, is on photographs that the editors have been able to dig from various archives. There are some stunning and disturbing early photographs from around the country, covering life in the bustling cities, as well as in the country side. The image content ranges from Japanese atrocities during the war, to Shanghai Belles strolling on the boulevard. The pictures really transport the reader to the past in a way that a textbook couldn't. It's also a crash course into China's recent history that introduces the main characters and episodes of this century of change and upheaval.

Check out part one of the "short reading list" here.