I thought I'd put up three of my favourite books about China in different genres; Fiction, History and Travel. The idea was to compile a list that would be an easy read, represent the country and that I could recommend to people, whose view on the country was mostly based on main stream media. So here goes: 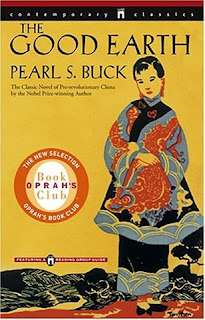 There's no way to call this contemporary, but I still think Pearl S. Buck's book captures the essence of China better than any other novel, old or new, that I have read.

This Pulitzer Prize winning title from 1931 by the author who was later awarded the Nobel Prize for Literature tells the story of the Wang-family. Wang Lung and his wife O-Lan, struggling to raise their family, slowly rise from poverty to become wealthy landowners. The author addresses themes in this book that, unfortunately, are still actual in China; infanticide and selling of daughters to other families.

Buck builds her story with such warmth for the country that the occasional harshness of life in the early 20th century, with its famines and turmoil, becomes bearable to the reader.

The family strives toward wealth and security through terrible losses. Their fortunes are tied to their land that Wang Lung refuses to give up. Buck contrasts the Wangs' struggle with the decadent life of the failing house of Hwang.

Pearl S. Buck was a daughter of missionaries. Growing up and spending the first half of her life in China, she was bilingual and gained an understanding of Chinese people and an affection to the country that was, and still is, shared by very few westerners. Her novels do convey this affection and the beautiful prose makes her books a great read.
Posted by Markus Laine at Wednesday, August 10, 2011