Picked up two excellent finds during a high way pit stop at a gas station's discount bookstore. A reprint of Kaj Donner's Among the Samoyed in Siberia (earlier reviewed here) and the Finnish translation of Erika Fatland's more recent book about the post-Soviet Central Asian states. Norwegian social anthropologist and writer Erika Fatland has earlier written about the Beslan massacre in North Ossetia. Her most recent book is titled Sovjetstan and recounts her two journeys to the old Sovjet republics of Central Asia: Turkmenistan, Kazakhstan, Tadjikistan, Kyrgyzstan and Uzbekistan. The book is written in classical travel literature style and succeeds in capturing the mood, ethnic tensions and day to day life in the different countries. There are not that many books about the Central Asian states (check Amazon if you don't believe me), so it's great to see a recent, well written travelogue. Fatland's writing, analysis and dry humor go beyond a superficial description and she draws on her background in anthropology and knowledge of Russia. Her style is reminiscent of one of the masters of the trade, Colin Thubron. The book seems to be available in several European languages, but apparently not yet in English. Hopefully this is corrected soon, because Fatland's writing should have universal appeal to arm chair travelers and geography buffs alike. 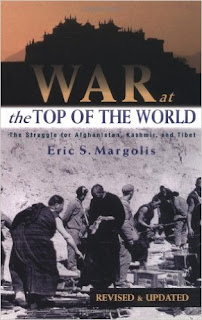 This book was one of my finds in  Strand bookstore in New York from two years ago.
Posted by Markus Laine at Saturday, November 12, 2016 4 comments:

A short video travelogue from China

If you're interested, I put up a short video of travel in Fujian province in China which was shot in the winter of 2015 - 2016. You can watch it on youtube here. More visual content - a lot of it from Asia - can be found on my other website www.markuslaine.com.
Posted by Markus Laine at Tuesday, October 04, 2016 No comments: 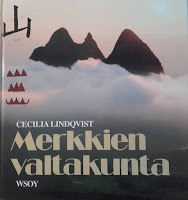 This book (original title "Teckens Rike") by Swedish Sinologist Cecilia Lindqvist tells the story of Chinese writing - and much more. The book traces the history of individual characters from their archaic beginnings, found on bone inscriptions discovered in the late 19th century to their modern day versions.
The book was quite popular among my group of young students of Chinese at the university in the 1990s and its appeal is not hard to understand. Lindqvist's writing is very up close and personal and she relates the history of writing in China to its general history and culture, as well as her personal experiences. I would assume the English version is hard to get by - in fact I did not even know one existed until I started to look for a translation of the Swedish title - but would definitely recommend getting your hands on a copy if possible. I have the Finnish edition and just got it back from a friend who borrowed it - for about 15 years!
Posted by Markus Laine at Monday, October 03, 2016 No comments:

The Golden House of Samarkand by Hugo Pratt Before I tackle the list of books in the last post, first something a bit different: A graphic novel by Italian comic book artist Hugo Pratt 'The Golden House of Samarkand'. This book is from the Corto Maltese series that tells of the adventures of a mysterious sea captain; Corto Maltese. The son of a Cornish sailor and Spanish witch-prostitute Corto is a prototype of the romantic adventurer; loved by the ladies rich and poor alike and feared by enemies.
'Samarkand' is set in Central Asia around World War I. Corto's search of treasure and wish to save his eccentric Russian friend Rasputin take him from Cyprus to Buhara. Like in other Pratt's novels there are numerous historical figures, for example Joseph Stalin and Enver Pasha. The story moves at breakneck speed and mixes historical fact with dream sequences and includes not one, but two femmes fatales, Yazidi shamans and whirling Dervishes.
As usual, the Finnish edition includes an excellent prologue text - a historical primer to the story background.
However, this is not my favorite Corto Maltese story. It moves too fast for me but it's still an excellent read, especially if you're into romantic adventure. If this was not just right for you, but you'd like to give Pratt another chance try to read Tango! It's a Corto Maltese album also, but very different in character from Samarkand.
Posted by Markus Laine at Monday, May 30, 2016 No comments:

No excuses for not updating Bibliasia - I've been lazy. Will try to fix that. Since I don't have any favorite book that I've read recently I thought I'd first list all those I am in possession of. I'll start with the Kindle editions first, since the Asia related ebooks are in their own folder:

Annapurna: The First Conquest of an 8000 Meter Peak by Maurice Herzog
The Ascent of Manaslu: Climbing the world's eight highest mountain by Mark Horrell
Buried in the Sky: The Extraordinary Story of the Sherpa Climbers on K2's Deadliest Day by Peter Zuckerman and Amanda Padoan
China and the Chinese by Herbert Allen Giles
Comes the Peace: My Journey to Forgiveness by Daja Wangchuck Meston
Eccentric Explorers by Michael Buckley
Empire: How Britain Made the Modern World by Niall Ferguson
Escape from Camp 14: One Man's Remarkable Odyssey from North Korea to Freedom in the West by Blaine Harden
For a Song and a Hundred Songs: A Poet's Journey Through a Chinese Prison by Liao Yiwu
The Great Game by Peter Hopkirk
The Horse That Leaps Through Clouds: A Tale of Espionage, the Silk Road and the Rise of Modern China by Eric Enno Tamm
In the Forbidden Land: An Account of a journey Tibet, capture by the Tibetan authorities, imprisonment,... by Arnold Henry Savage Landor
K2: The Story of the Savage Mountain by Jim Curran
The Light of Asia by Sir Edwin Arnold
Lost in Tibet : The Untold Story of Five American Airmen, a Doomed Plane and the Will to Survive by Richard Starks and Miriam Murcutt
The Man Who Loved China (P.S.) by Simon Winchester
The Man Who Would Be King by Rudyard Kipling
Married to Bhutan by Linda Leaming
Murder in Ancient China: Two Judge Dee Mysteries by Robert van Gulik
Nanda Devi by Eric Shipton, Jim Perrin, Stephen Venables and Hugh Ruttledge
One Bullet Away: The Making of a Marine Officer by Nathaniel C. Fick
The Only Thing Worth Dying For by Eric Blehm
Outlaw Platoon by Sean Parnell
Over the Edge of the World by Laurence Bergreen
Peony: A Novel of China by Pearl S. Buck
Sahib: The British Soldier in India 1750-1914 by Richard Holmes
Samurai William: The Adventurer Who Unlocked Japan by Giles Milton
Savage Arena by Joe Tasker and Chris Bonington
Thin Air: Encounters in the Himalaya by Greg Child
To A Mountain in Tibet by Colin Thubron
Travels in Siberia by Ian Frazier
Unbroken: A World War II Story of Survival, Resilience, and Redemption by Laura Hillenbrand
When America First Met China: An Exotic History of Tea, Drugs and Money in the Age of Sail by Eric Jay Dolin
When Asia Was the World: Traveling Merchants, Scholars, Warriors, and Monks Who Created the Riches of the East by Stewart Gordon
The Willow Pattern: A Judge Dee Mystery by Robert Van Gulik

35 titles, some of which have been reviewed here, some I only have a vague recollection of and some real gems that have not yet been introduced. A list of hard copy books would be nice, but has to wait until I organize the library again (and collect all the books lent to friends).

Quite many books about mountaineering. While I don't climb mountains myself, I've always been fascinated by them and love being in mountainous areas, especially the Himalayas and their foothills. In any case there's enough material for several posts in the not-too-distant future.

Oh, if you want to see a short film I made about our travel in Fujian province last Christmas check it out here: HERE.