Ed Viesturs with David Roberts: The Mountain - My Time on Everest 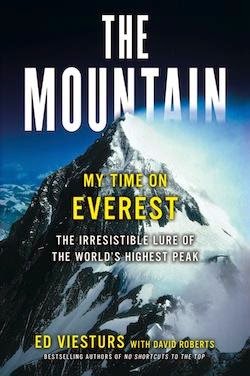 One of the finds from the Strand Bookstore is this mountaineering book from Ed Viesturs (written together with David Roberts). Viesturs is one of the world's foremost mountaineers and belongs to the small club of climbers to have made it to the top of all 14 of the world's 8000+ meter peaks. He features prominently in many climbing books by other writers as well and I had read about his accomplishments in Jim Curran's book about the K2 (absolutely great, need to review that one soon!) and Greg Child's Thin Air: Encounters in the Himalaya among others. He has written several other books about his exploits together with Roberts.

The Mountain documents Viesturs' eleven expeditions to Mt. Everest, out of which seven ended with a successful summit bid. Besides his own exploits on the mountain, Viesturs gives a lot of background information and history of the exploration of Mt. Everest. He was present during one of the most dramatic seasons on the mountain in 1996 when 8 people perished after being caught in a storm high up the mountain (probably best known from Jon Krakauer's Into Thin Air).

I have to admit this was not my all time favorite mountaineering book. The book is well written. I like the author's honest and non-pretentious style, especially when he is defending the rights of paying clients to be on the mountain. He also gives his opinions on some controversial developments on the mountain, but something is missing.

Maybe the problem of the book is that its focus is too broad. As a general history of Everest, it does not really work and while it's not meant as such, I wished it would go in to more depth on some of the background information. Early expeditions and new routes are introduced in detail, however. Fitting 11 expeditions, mountaineering history and personal development in 330 pages is pushing the limit. The Mountain probably would have benefited from more length, especially since the writers obviously are skilled in producing prose. All that said, I read it almost in a single sitting.

Read the hardcover edition of 2013 from Touchstone.
Posted by Markus Laine at Wednesday, July 30, 2014 No comments:

Spent 2 weeks in the US in June, visiting family in New Jersey and New York. My previous visit to the Big Apple was 30 years ago, and man had the city improved during that time. I was hoping to visit some bookstores with Asia related books and was looking for good ones in Chinatown without much luck. Someone suggested Strand bookstore (homepage here). Man, am I happy I took the advice. Founded in 1927, they advertise having 18 miles of books and I have to believe that. Apparently they supplied Steven Spielberg's library.

The Asian History section alone has to be more than 100 shelf-meters. There's piles of books everywhere! In addition, they have a whole section on exploration with lots of titles about Asia. Many of the volumes are second hand or review copies and pricing is attractive. There is a rare books collection as well, if you're into that kind of thing. 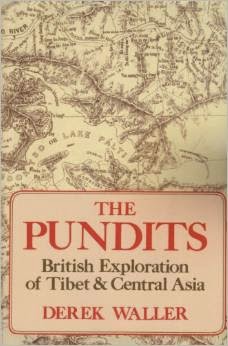 Best thing is, you never know what you'll find. There are so many books about Asia for example, that you will likely make new discoveries, that you did not realize you absolutely needed. I regrettably had to leave early as it was close to closing time, but still came with with a bagful of books. Very happy with what I found. I'm currently reading Derek Waller's The Pundits: British Exploration of Tibet and Central Asia. A beautiful hard cover volume (originally a review copy).