Red Dust: A Path Through China

Ma Jian is a Beijing intellectual in his thirties. During the campaign against Spiritual Pollution, another communist scheme targeting individuals deemed dangerous to the ruling party, he is implicated as a class enemy and decides to leave his old life as a photographer and painter in Beijing. Ma Jian jumps a train bound for Xinjiang and ends up traveling around China for three years. Red Dust: A Path Through China from 2001 is his story. Ma travels by train, bus and on foot when he is short on cash. He almost perishes in the Ordos, when he loses his way crossing it. His is real hard core traveling, and he does not romanticize it. Fleas bite, shit stinks and rotten food makes him vomit. 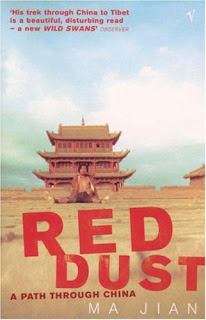 The book is a travelogue, but a very special one. First of all, the time frame of the story is one of profound change in China. Ma Jian's story happens between 1983-86 and captures the spirit of economic reforms and their influence on individuals in the early eighties.

Secondly Ma has a unique vantage point to observe life in China. He is Chinese but admits feeling foreign in the out of way villages and cities he visits with his long hair, beard and jeans. His book concentrates mainly on the frontier areas of China; Yunnan, Guizhou, Tibet and Qinghai. Everywhere he goes, he not only meets and writes about the common people, but he also offers the reader a glance into the minds of Chinese intellectuals around the country. For Ma, the travels take on a spiritual dimension. He is trying to figure out who he is and what his goals in life are.

What I especially appreciate in this book is Ma's honesty in writing. He does not pretend to be a nice guy. In fact he comes on as somewhat of a scoundrel, playing the part of a spiritual guru, barber or thief when it helps him to get what he needs. Ma describes his lust for women when traveling alone and his sexual exploits when he finds company. His story is very different from many whitewashed stories of contemporary western travellers.