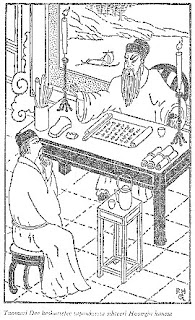 My wife found a Judge Dee book in the library last week that I hadn't read before, wohoo! The Phantom of the Temple by Robert van Gulik (1910-67) is from 1966 (?) originally. I believe it's the last Judge Dee book by van Gulik, sice it was published just before his death. Before I get to the book, let's have a short look at the series and Mr. Gulik first.

I stumbled upon Judge Dee books a few years ago, when I was vacationing at my uncle's place in northern Finland. Being a bit bored, I was rummaging through my cousin's bookshelf and found The Chinese Lake Murders there. I devoured the book in one afternoon and was hooked. I've since read every novel by van Gulik I've been able to lay my hands on.

Mr. van Gulik was an Oriental scholar originally from the Netherlands, who spent a lion's share of his time in Asia, mainly Indonesia and Japan. He even represented the Netherlands as an ambassador in Tokyo. Van Gulik was fluent in Chinese and while in Japan, translated an old Chinese detective story into English. The story was about Di Renjie, a popular historical character of the Tang-era, who lived in the 7th century. Di Renjie (Dee) was a magistrate of the empire and has become a legend in China. After his translation van Gulik tried his hand at constructing his own murder mystery. The result was The Chinese Maze Murders. After that several Judge Dee books followed.

Although set in the Tang era, the books have mixed in historical facts from Ming China as well. Van Gulik adapted his style from the traditional Chinese murder story, to better suit western audiences. The culprits are not revealed until the end of the stories. 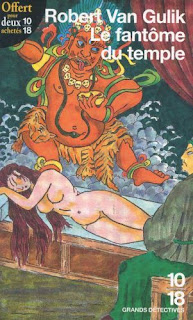 The Phantom of the Temple is set in Lan-fang, a small town on the northern frontier in present day Shandong. Judge Dee has settled down as the local magistrate with his family and associates, Sergeant Hoong and Ma Joong, the old highway robber turned official. The books story chronologically follows The Chinese Maze Murders.

﻿In an abandoned Buddhist temple a beheaded corpse is found and the Judge with his helpers sets out to solve this mystery. Soon a missing beauty, a witch and a treasure of gold are mixed into the story as well.

Van Gulik was influenced by Chinese folk stories and his language is staright forward and simple, almost brutal. Like in the earlier Judge Dee stories, women often shed their clothes for Ma Joong. Where van Gulik shines is painting a picture of Chinese society (even though it's a mix of eras). He was extremely well versed in Chinese history and the book contains a great many interesting details about life in a historical Chinese city; The writer highlights the tensions between Han Chinese and "Tartars" in this border town. Tantric Buddhists get their share of xenophobia as well.

If you have not yet read any of van Gulik's novels, I can only recommend you try one. I promise it won't be your last.

Other books by Robert van Gulik: