This came to my mind when I was writing about Maraini's book: many of the explorers of Central Asia, Tibet especially, had Fascist connections, or were at least accused of such.

Is it just that Fascism was on the rise in Europe at the same time as the amount of travellers to the area grew? Sven Hedin, Giuseppe Tucci, Heinrich Harrer and many others active in the region between the world wars were accused of supporting Fascist ideology.

Whatever the motivation of individuals in Central Asia, it is a fact that some of the masterminds of pre-WWII Nazi ideology had a personal interest in Tibet and financed expeditions to the area in the hopes of finding evidence to support the crackpot racial theories of the day.

Heather Pringle has written a meticulously researched popular book, that also deals with Asian exploration by the Nazis: The Master Plan: Himmler's Scholars and the Holocaust (2006) 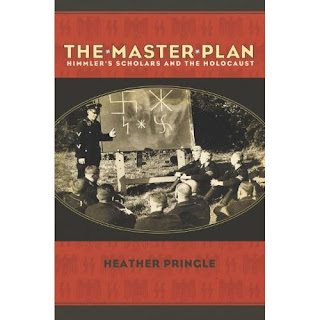 It's an interesting and scary read into history, but also shows what kind of compromises the scientist were willing to make in their morals and integrity to get funding for research and gain acceptance from the elite.
Posted by Markus Laine at Thursday, June 02, 2011