Henrik Wrede: On a River Boat and Tarantass - a Travelogue from Siberia 100 Years Ago

This book was originally published 1918 in Swedish under the name I Sibirien 30 År Sedan, I read the second Finnish edition of 1985 (Jokilaivalla ja tarantassissa - matkakuvaus Siperiasta 100 vuoden takaa), borrowed from the excellent Turku library. 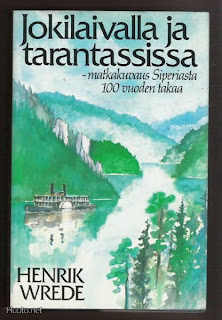 Henrik Wrede was a Baron from Finland who in the 1880's travelled in Siberia, as far as Yakutsk to distribute Bibles as an agent of the British and Foreign Bible Society. At that time Finland was a grand duchy of the Russian empire and Wrede as a Russian subject had access to this hinterland of convicts and native peoples. In his foreword Wrede tells that he originally did not want to write about his experiences in Siberia and only did so 30 years later after being persuaded by a friend. His original concern had been that people mentioned in the story may be hurt but after such a long time they would not be affected by his writing.

As you may have guessed from his occupation, Wrede was a deeply religious man and this is one of the key elements in the book. Wrede's decision to leave home is preceded by a prophetic dream which convinces him of the divine nature of his task. He casts his doubts aside and puts his life into the hands of God, setting off into the unknown and dangerous East. In 1883, 29 years old, he travels to Nizhnyi-Novgorod through Moscow and St. Petersburg. From Novgorod he continues by river boat to Perm on the Volga and Kama rivers. Wrede notes the Fenno-Ugrian peoples populating the Kama region. From Perm the young man continues by train to Ekaterinburg, where he changes to that most Siberian of transport; the tarantass.

A horse cart used to cover vast distances in Russia, the horses of the tarantass were changed at regular intervals and allowed for rapid progress of one's journey - if your kidneys could take it. The cart had no suspension and various early Siberian travel writers curse the vehicle for its lack of comfort. Wrede survives this leg of the journey and finally reaches Irkutsk, his base for the following years.

Wrede sets up his Bible depot and shop in town. He tells the stories behind many of the exiled people making up a big part of the population. Wrede paints a  grim picture of life in Irkutsk in the late 1800s. The city is dangerous and the surrounding wilderness is infested with robbers. The young man survives several attempts on his life, being shot at by natives and almost poisoned by his servant. Wrede braves it all with the help of God.

Even worse are the different government bureaucrats, often exiles themselves in Siberia. Wrede tells of terrible corruption of various police chiefs, governors and other civil servants. He gets to travel widely around Irkutsk, all the way to Mongolia and Yakutsk and makes interesting observations of different peoples.

After 3 years in Siberia, wearing fur and leather he returns back to civilization and his beloved family. Wrede continued in Finland to work with convicts together with his sister.

So, did I like this book and would I recommend it? If you can filter out the religious stuff, the book's not too bad a read. The author is too occupied saving souls to be very interested in worldly life. The book was written 30 years after Wrede's actual Siberian experience, so many things seem to be coloured by memory and are probably exaggerated.

However, Wrede was quite a sharp observer and even though he is convinced of the superiority of his faith, he seems to have genuine compassion and understanding of people of various backgrounds and ethnicity. As a glimpse to the life in Siberia the book serves its purpose, but it does not delve deeply into the lifestyles of Siberian peoples.
Posted by Markus Laine at Thursday, June 02, 2011