About a year ago I traded a bunch of old comics in a second hand bookstore to some books. One of them was The Great Wall by Julia Lovell from 2006. Despite it's name, it reads more like a general history of China than a book about the wall specifically. 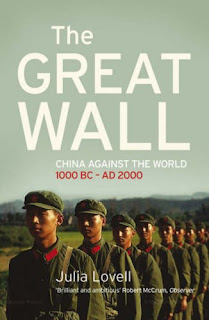 With some 400 pages the book flies through dynasties starting with the Qin. Lovell ties each epoch with wall building and elaborates on the reasons for the numerous building projects, be they purely defensive or tied to internal politics of the time. As a history book, it's decent. Lovell is able to depict the ebb and flow of the nomadic tribes on China's Northern and Western frontiers and their influence on the realm, its peoples and culture. For me, realizing this constant pulse of the Steppe throughout earlier Chinese history was a bit of a revelation, although I have read a lot on the subject. Also, Lovell explains how and why in more recent history different walls became the Great Wall.

It's a popular book and Lovell has not made any original field research, rather relying on existing literary sources. Maybe because of this, the book, at least to me, seems a little arid; there is little personal connection to the places and historical events described. Being a lecturer of Chinese history and literature at Cambridge, I was hoping Lovell would be able to put more of a personal touch to the story.

In the first quarter of the book Lovell makes some arguments that seem to be there just to raise controversy. In my view she is not able to defend these arguments properly and this put me off a bit (it actually took me two tries to actually finish the book). As an example, when discussing the Chinese realm Lovell first states: "There are, in fact, strong grounds for arguing that the Chinese nation was born as recently as 100 years ago", but later goes on about Qin Shihuang: "And once he had reached his goal, China was largely defined, both inside and out." It's semantics of course (Chinese nation does not equal China), but what on earth are these strong grounds for the first argument?

In the end Lovell equates Chinese censorship of the internet as the new Great Wall. To be honest, I would have left this most recent history out of the book. It seems out of place when compared to the history of the real Wall on the preceding pages.

The Great Wall is a decent overview of the history of China with its own twist; the story of the Wall. If you just want to read one book about the subject (history that is, not the wall), there probably are more suitable books out there. For people with a background in Sinology, the book may give some new insights, it did to me.
Posted by Markus Laine at Saturday, July 23, 2011