Eric Blehm: The Only Thing Worth Dying For

... or How Eleven Green Berets Forged a New Afghanistan (2010), read on Amazon Kindle. 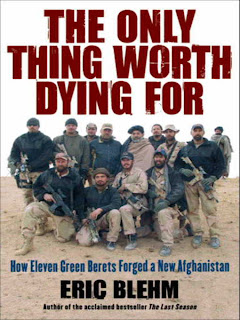 Blehm's book is a true account of a U.S. special forces unit sent to Afghanistan in the fall of 2001, following 9/11. The unit of green berets, ODA 574, led by captain Jason Amerine is airlifted with helicopters to southern Afghanistan with Hamid Karzai, with the aim to train guerrilla forces of local Pashtuns, loyal to Karzai to wage war against the Taliban, still strong in the southern provinces.


Things develop faster than anticipated and the unit finds itself fighting alongside locals to take over towns soon after their landing. Working closely with Hamid Karzai the group and Pashtun leader learn to respect each other. Against special operations doctrine, headquarters soon send more senior officers on site to "support" Amerine's and Karzai's efforts to oust the Taliban.
Tensions soon develop between ODA 574 and the newcomers, when superior officers start to mingle in the day to day operations. ODA 574's tour in Afghanistan ends in tragedy.
The book is well written and Blehm has managed to keep it interesting on two levels. On one hand, The Only Thing Worth Dying For is a traditional war hero story, packed with adrenalin filled descriptions of firefights and cool military technology. Reading about a massive air operation against a hundred Taliban trucks threatening to overrun the unit's and their guerillas' positions, kept me glued to the book. It also gives a look into the politics inside the military.
However, the book has another background story; that of Hamid Karzai and the political situation in Afghanistan. Karzai in 2001 was just one Pashtun leader among many warlords, unknown internationally. Blehm's book sets the stage for Karzai's ascent to spokesman of the interim government in Afghanistan, and ultimately presidency of the country, his current position. The author gives a exceedingly positive picture of the Pashtun leader (as does Rashid), who has come under heavy criticism in recent years. In these uncertain early months of the Afghan-American offensive against the Taliban, Karzai is portrayed as the only possible leader for the whole country.
Blehm's writing style is quite light and despite being documentary, the book relies much on dialogue. There must be quite a lot of the author's influence in the story, but it makes this shortish book immensely readable. If you like books filled with machismo and modern warfare action and want to learn something about recent Afghan history at the same time, I can recommend this one!
Posted by Markus Laine at Saturday, March 17, 2012