Kai Donner: Among the Samoyed in Siberia

Something before I get to A Carpet Ride to Khiva: I found a first edition from 1915 of Kai Donner's "Siperian Samojedien keskuudessa" in the City Library a few days ago and had it with me on a trip to Central Europe. Kai Donner was a Finnish explorer and anthropologist from a notable academic family. He was also an activist for the independence movement in Finland. Donner's father was the first Finnish professor of Sanskrit, but the best known family member nowadays is Kai's son Jörn Donner, who is a movie maker and has in recent years publicized his fathers research in Finland. 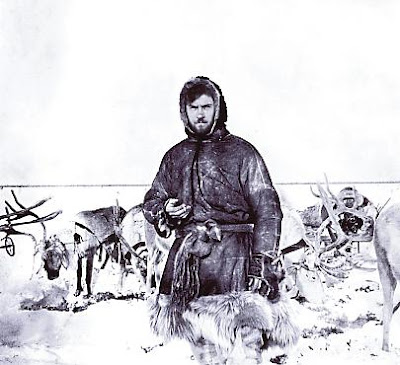 The book covers Donner's expedition to northern Siberia in 1911-1913, where he set out to study the language and culture of the Samoyeds, a small people spread over vast areas in the Siberian tundra. The Samoyed language is a distant relative of Finnish, which explains the interest of linguists and anthropologists in them here. Donner's travels take him to the area between the rivers Ob and Jenisei where he lives with the local people studying the language with several "language masters". He also makes observations of everyday life without prejudice. This sets Donner's book apart from the religious bigotry of Wrede. Donner is a true humanist and can appreciate the culture of different people's without judging them too harshly.

Donner describes the difficult life the Samoyeds live in this unforgiving country, where winter temperatures may plummet to -60 C. He gets to know hordes of mosquitoes and hungry bears in the summer and the perils of travelling in the winter, when he almost loses his limbs to frostbite and is in danger of starving with a whole caravan of reindeer herders lost on the tundra. The Samoyed's fate (and for that matter culture), reminds me a bit of American Indians. Liquor, obtained from Russian traders at extortionate prices, is the downfall of many Samojed.

In addition to his anthropological observations, Donner also tells about the terrible fate of the numerous people exiled to Siberia. He meets Russians and Finns, that for different reasons have been banished to this periphery of the empire.

Reading this book I am once again humbled by the courage of early explorers. Today it would be inconceivable that someone would set out into the Siberian wild, alone with just a sleigh pulled by a couple of reindeers, all in the name of science.

The book in itself is entertaining on two levels. It describes the life of a people little known, but it's also a story of one man's struggle against inhospitable nature. For sure, this is not a book that everybody will enjoy. It's not a literary masterpiece, but if you're into explorer's histories, or interested in anthropology, or just some other kind of nutcase this is very entertaining. I did like it, a lot.

EDIT: I just found out that Donner's book has been translated into English and is available from Amazon. The title of this post was changed to reflect the title of the translation.
Posted by Markus Laine at Friday, September 09, 2011