The Siege at Peking by Peter Fleming

Peter Fleming's book, first published in 1959 gives a detailed account of the siege of the foreign legations in Beijing during the last months of the Boxer Rebellion in 1900. Anti-foreign sentiment in China had been running high for the previous years and the Righteous Harmonious Fist (义和团) , better known in the West as the Boxers had been attacking missionaries and Chinese Christian converts in the northern provinces. The Boxers, a motley collection of different gangs around the Northeast and without a central organization, were thought in local folklore to be invincible and unaffected by swords or bullets. They had caught the attention of the Empress Dowager, the de facto ruler of the empire, who wanted to use them against foreign western influences she, and other hardliners at court detested. 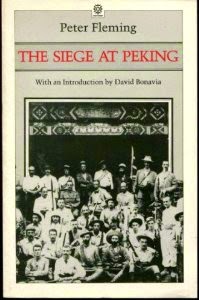 Boxers first and later regular Chinese troops attacked the diplomatic quarters in Beijing, where in addition to the usual residents a considerable population of  refugees from the adjoining cities and provinces had gathered. Against seemingly impossible odds the small foreign garrison held the overwhelming enemy at bay, until a relief force was able to reach them from Tianjin some two months later.

Fleming spends quite some time in explaining the background behind the attack. Almost 60 years between the events and publishing the book provide him with an opportunity to view the developments with criticism directed also at western powers. China's humiliation by the powers in the century leading to the Boxer Rebellion is spelled out and intrigues at the imperial court explained.

However, the forte of the book is in the action. The author succeeds in really reconstructing the development of the situation in the legations in astonishing detail. Chinese attacks and countermeasures of the defenders are described lively and individual acts of courage or cowardice are not forgotten The dramatis personae are introduced in enough detail and through their actions to make one really identify with them. A lot of research went into this piece of work.

A history book about a pivotal time in the development of modern China that reads like thriller 50 years after it's publication. Really liked this one!